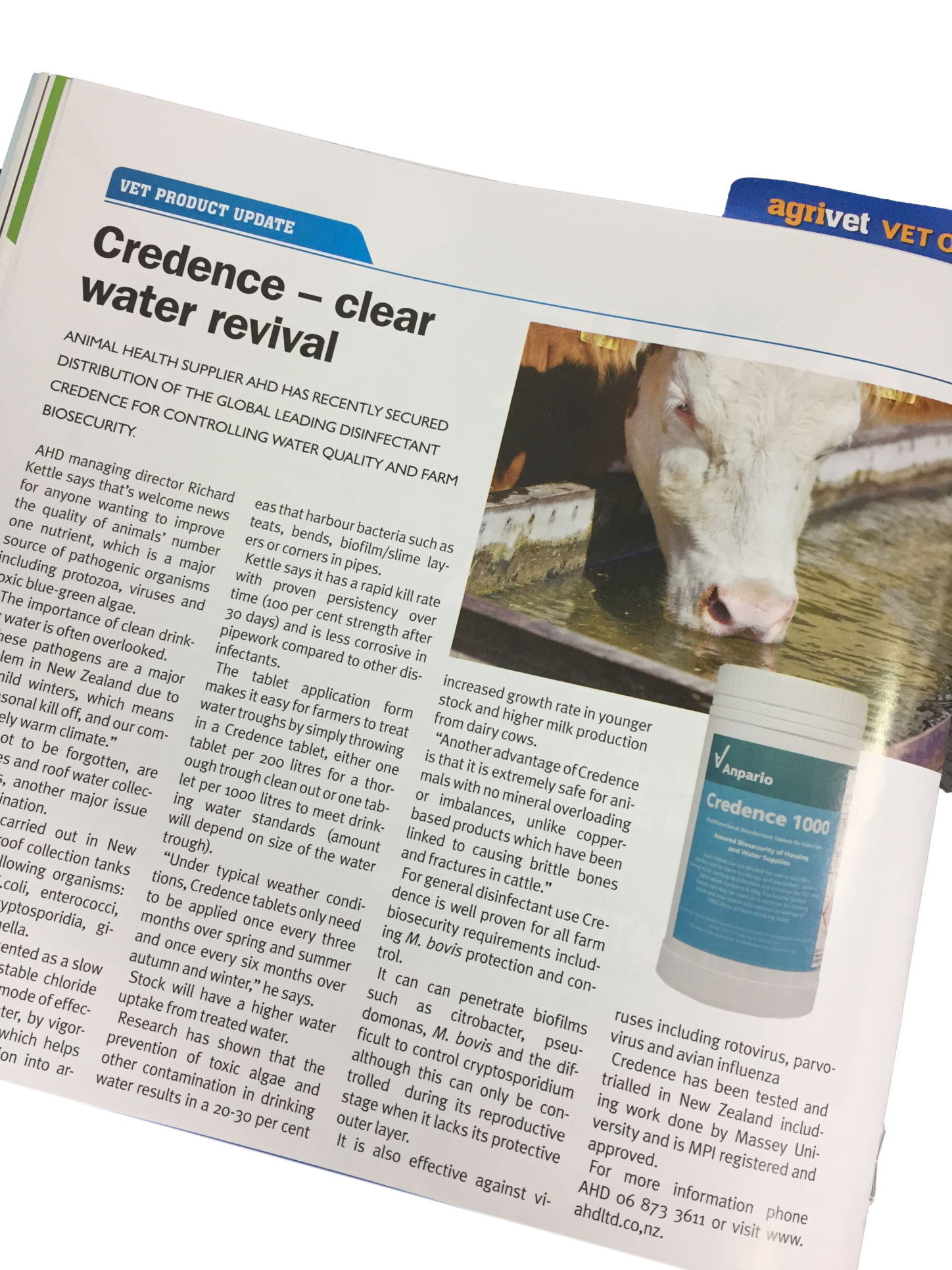 Check out this great article as featured in Agribusiness Agrivet section.

“The importance of clean drinking water is often overlooked”

“These pathogens are a major problem in New Zealand due to the mild winters, which means no seasonal kill off, and our comparatively warm climate. Also, not to be forgotten, are bore holes and roof water collection tanks, another major issue for contamination.

Credence is presented as a slow release tablet of stable chloride ions with a unique mode of effective dispersal in water, by vigorous effervescence, which helps give better penetration into areas that harbour bacteria such as teats, bends, biofilm/slime layers or corners in pipes.

Kettle says it has a rapid kill rate with proven persistency over time (100% strength after 30 days) and is less corrosive in pipework compared to other disinfectants.

The tablet application form makes it easy for farmers to treat water troughs by simply throwing in a Credence tablet either one tablet per 200 litres for a thorough trough clean out or, one tablet per 1,000 litres to meet drinking water standards (amount will depend on size of the water trough).

“Under typical weather conditions Credence tablets only need to be applied once every three months over spring and summer and once every six months over autumn and winter,” he says.

Stock will have a higher water uptake from treated water.

Research has shown that the prevention of toxic algae and other contamination in drinking water results in a 20-30% increased growth rate in younger stock and higher milk production from dairy cows.

“Another advantage of Credence is that it is extremely safe for animals with no mineral overloading or imbalances, unlike copper-based products which have been linked to causing brittle bones and fractures in cattle.”

For general disinfectant use Credence is well proven for all farm biosecurity requirements including M. bovis protection and control.

It can penetrate biofilms such as Citrobacter, Pseudomonas and M. bovis and the difficult to control Cryptosporidium although this can only be controlled during its reproductive stage when it lacks its protective outer layer.

It is also effective against viruses including rotovirus, parvovirus and avian influenza.

Credence has been tested and trialled in New Zealand including work done by Massey University and is MPI registered and approved.