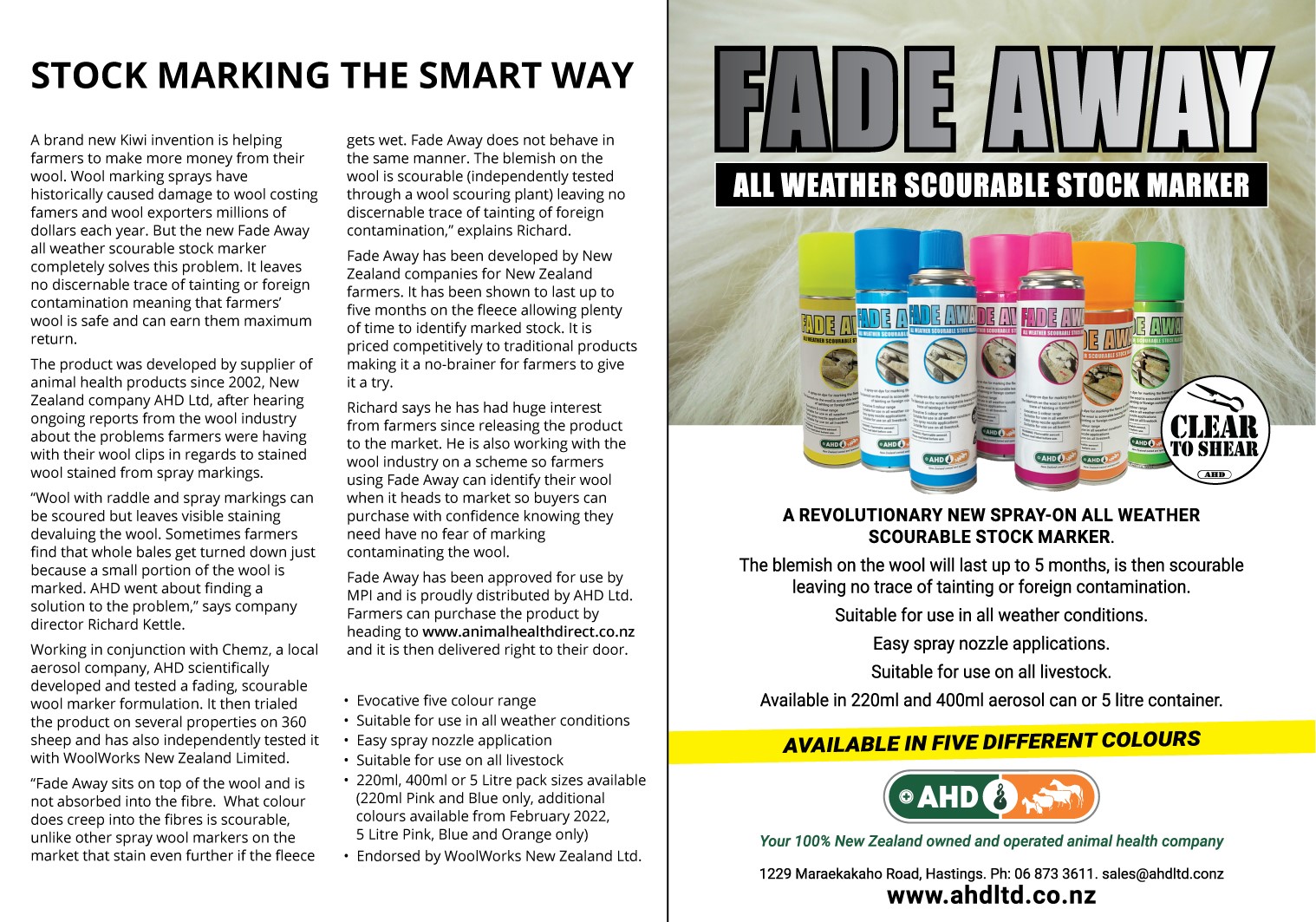 A brand new Kiwi invention is helping farmers to make more money from their wool. Wool marking sprays have historically caused damage to wool costing famers and wool exporters millions of dollars each year. But the new Fade Away all weather scourable stock marker completely solves this problem. It leaves no discernable trace of tainting or foreign contamination meaning that farmers’ wool is safe and can earn them maximum return.
The product was developed by supplier of animal health products since 2002, New Zealand company AHD Ltd, after hearing ongoing reports from the wool industry about the problems farmers were having with their wool clips in regards to stained wool stained from spray markings. “Wool with raddle and spray markings can be scoured but leaves visible staining devaluing the wool. Sometimes farmers find that whole bales get turned down just because a small portion of the wool is marked. AHD went about finding a solution to the problem,” says company
director Richard Kettle.
Working in conjunction with Chemz, a local aerosol company, AHD scientifically developed and tested a fading, scourable wool marker formulation. It then trialed the product on several properties on 360 sheep and has also independently tested it with WoolWorks New Zealand Limited.
“Fade Away sits on top of the wool and is not absorbed into the fibre. What colour does creep into the fibres is scourable, unlike other spray wool markers on the market that stain even further if the fleece gets wet.Fadeaway does not behave in the same manner. The blemish on the wool is scourable (independently tested through a wool scouring plant) leaving no discernable trace of tainting of foreign contamination,” explains Richard.
Fade Away has been developed by New Zealand companies for New Zealand farmers. It has been shown to last up to five months on the fleece allowing plenty of time to identify marked stock. It is priced competitively to traditional products making it a no-brainer for farmers to give it a try.
Richard says he has had huge interest from farmers since releasing the product to the market. He is also working with the wool industry on a scheme so farmers using Fade Away can identify their wool when it heads to market so buyers can purchase with confidence knowing they need have no fear of marking contaminating the wool.

Fade Away has been approved for use by MPI and is proudly distributed by AHD Ltd. Farmers can purchase the product by
heading to www.animalhealthdirect.co.nz and it is then delivered right to their door.
• Evocative five colour range
• Suitable for use in all weather conditions
• Easy spray nozzle application
• Suitable for use on all livestock
• 220ml, 400ml or 5 Litre pack sizes available
(220ml Pink and Blue only, additional
colours available from February 2022,
5 Litre Pink, Blue and Orange only)
• Endorsed by WoolWorks New Zealand Ltd.